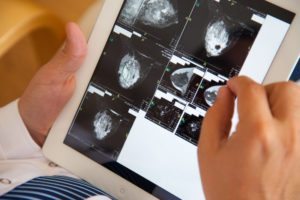 About 1 in 8 (12%) women in the United States will develop invasive breast cancer over the course of her lifetime. It is a truly staggering statistic; however, death rates due to breast cancer are decreasing among women of all racial and ethnic groups. This progress is credited in part to the groundbreaking advancements made in digital mammography.

When it comes to detecting cancer, the saying “better late than never” just doesn’t apply.  The importance of early detection and targeting breast abnormalities in their early stages cannot be overstated, as it can be vital to the successful treatment of the disease, and long-term survival of patients. Unfortunately, for many years, the modes of capturing images weren’t extremely effective due to their static nature.

We’ve come a long way since 1913, in more respects than one. Albert Salomon, a German surgeon, was the first person to study X-rays of breast tissue. His findings confirmed that radiology could distinguish between different strains of cancer (a fact that was previously unknown), and discovered how tumors spread. He specifically studied their dispersion through the axillary lymph nodes – the region where three-quarters of all lymph node drainage pools.

However, it wasn’t until the 1930s when mammograms were recognized as a diagnostic tool for the detection of breast cancers. Stafford L. Warren, an American radiologist and the pioneer of mammography, revolutionized healthcare when he became the first physician to utilize the imaging technique to detect cancer prior to surgery. Prior to this point, doctors had to perform more invasive surgeries simply to detect diseases that would otherwise go unknown.

Mammography – a low dose X-ray exam that yields clear photos of the breasts – excels at detecting breast cancer in its premature stage. It can even spot ductal carcinoma, (abnormal cells in the breast lining) which can breed more invasive forms of cancer. Dubbed the “father of mammography”, Dr. Robert Egan is widely recognized for spreading the word about screenings and their benefits. While practicing at M.D. Anderson Hospital, he demonstrated his radiology techniques, and collaborated with the American College of Radiology to establish mammography training facilities throughout the U.S.

By the 1960s, the practice had become mainstream – with physicians everywhere screening healthy patients for the possibility of cancer cells. Additionally, many doctor’s offices housed X-ray machines dedicated exclusively to breast imaging. As with any innovation, there can be setbacks before there is continued progress. Critics of this procedure feared that the radiation from mammography X-rays could lead to harmful levels of exposure. The underexposed images that X-ray tubes produced were also of lower contrast, and therefore, not as effective in distinguishing between harmful and healthy tissue. The screen-film mammography employed in the 1980s and 1990s proved advantageous for producing more vivid images of dense breast tissues; however, it wasn’t until the turn of the century when digital mammography would be introduced – offering a myriad of benefits for doctors and patients alike.

While both film and digital modes of mammography can identify cancer, only digital photos allow your physician the freedom to manipulate the images. The ability to lighten, darken, and amplify the contrast of images make this method far superior for use on pre- or peri-menopausal women, women younger than 50, and those who generally have denser breast tissue. According to the National Institutes of Health, the main shortcoming of mammography is attempting to locate cancer cells in women with dense, rather than fatty, breast tissue. Unfortunately, non-calcified cancers can camouflage themselves in a cloak of dense tissue – sometimes going undetected by traditional methods of X-ray.

Today, digital mammography offers an efficient, low-dose X-ray method of observing the breast. Accredited by the American College of Radiology (ACR), Independent Imaging is one facility that’s harnessing the power of digital mammography to pinpoint lesions (abnormal growths) in their patients. While regular, breast self-examinations are a critical step toward a cancer-free future, digital mammography goes one step farther – offering a clear window through which one can detect small, or deeply-hidden tumors.

Their unique office also utilizes cutting-edge 3D technology for digital mammography. Known as digital breast tomosynthesis, this technique involves capturing several low-dose images (or slices) from a bevy of angles. The result is a comprehensive picture that is proven to be even more effective than 2D imaging at discovering breast cancer. Independent Imaging houses a state-of-the-art GE Flat Panel Detector, which boasts fewer image retakes. Patients will benefit from saved time, and the smallest exposure of radiation of all methods on the market.

While mammography can be a vexing diagnostic procedure for many, facilities like Independent Imaging make the process seamless, offering a compassionate approach to treatment. For more information on breast screening, call 561-795-5558. Thanks to the significant strides made with digital mammography, it seems a world with fewer incidences of metastatic cancer is coming into clear view.