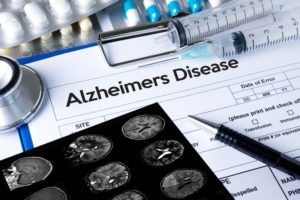 The most prevalent form of dementia, Alzheimer’s disease currently affects over 5 million Americans, and is the 6th leading cause of death in the United States. It claims the lives of more people than breast and prostate cancer combined.

According to the Alzheimer’s Association®, the disease is progressive – meaning that its symptoms gradually worsen over time. For this reason, it’s imperative to catch the first signs as early as possible. It’s widely established that the disease progresses through three major stages, ranging from Preclinical Alzheimer’s to Severe Cognitive Decline – the latter being marked by the inability to communicate. There are typically no outward signs of the disease during its early stages, so many don’t receive a proper diagnosis until it’s too late and substantial brain damage has already occurred.

With over 100 billion nerve cells and 100 trillion synapses, the brain is an intricate powerhouse that sends messages to our body; these signals guide us on everything from our daily feeding schedules, to more nuanced activities such as giving a speech or taking a timed test. Neurons transmit this information through highways called synapses.

Throughout this process, the brain produces microscopic protein clusters known as amyloid plaque, which typically breaks down on its own. However, in Alzheimer’s patients, amyloid protein divides and clusters – causing a build-up of plaque that prevents smooth signaling between cells.

Scientists have already proven how AD can change the structure of the brain, and recently, we have discovered how to detect these changes earlier. The board-certified radiologists at Independent Imaging are among the physicians making great strides in early detection with the use of imaging studies. In fact, many cutting-edge techniques can detect Alzheimer’s Disease long before it causes irreparable damage to patients.

Magnetic Resonance Imaging (MRI) and Positron Emission Tomography (PET) scans are two promising, non-invasive detection methods being explored. MRIs capture meticulous images of internal body structures without exposing the patient to radiation – making them a safe and effective option. The radiologists at Independent Imaging harness the power of the GE Signa EXCITE 11.0 MRI scanner to measure the 3-dimensional volume of brain structures, such as the hippocampus. According to Mayo Clinic, this vital limbic system component assists with forming memories, and has been proven to shrink in those suffering from dementia or AD.

PET scans are an especially advanced form of functional imaging that give physicians a glimpse into problems at the cellular level. Independent Imaging utilizes this technology to provide early detection of beta-amyloids – the problem plaque that can lead to memory loss. Their radiologists employ the use of radiopharmaceutical tracers which distinguish between a patient’s healthy and diseased tissues. While many people may find the idea of radioactive substances worrisome, reputable sources such as Mayo Clinic assert that the exposure is so minimal, the rewards outweigh the risks.

Whether you consider today’s state-of-the-art imaging techniques to be precognition or preventive care, one thing is certain – it’s always best to think ahead. Imaging studies like the ones mentioned here facilitate in early detection and help patients receive the timely preventive care they need.

Don’t delay a diagnosis for fear of what you may discover; the sooner your doctor can address your symptoms, the better your outcome will be. The knowledgeable team at Independent Imaging stays abreast of the latest technology and information available to provide world class care to their patients. If you or a loved one would like more information about their imaging studies, call 561-795-5558.