X-rays Allow Doctors to Look Inside Us 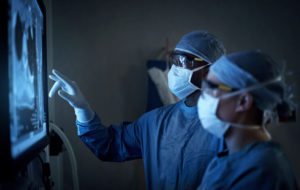 When you think of it, modern diagnostic tools are quite remarkable. For most of human history no one could see what actually went on inside the human body. That all started to change in 1895 when a German professor of physics, Wilhelm Conrad Roentgen, made an accidental discovery while working with cathode-ray tubes. He happened to have some crystals on a nearby table and looked up to see them glowing as he worked one hazy afternoon. Long story short, he accidently discovered a new kind of energy ray he dubbed “X-rays.” The very first human to have an X-ray was his wife. He took X-ray pictures of her hand.

Later in 1896, X-rays began to be used to treat medical issues. A wounded soldier was X-rayed to locate a bullet in his arm, and the age of medical imaging was born. Since then, X-rays have saved countless lives and been used to locate tumors, diagnose broken bones and as radiation therapy to fight cancer and more. The science of medical imaging continues to leap forward, allowing more and more innovative uses for this relatively recent discovery.

X-rays are Blocked by Bone and Denser Tissue

Today we tend to take this advanced technology for granted. Most people have had at least one X-ray and know that it shows images of bones. Fewer people understand how X-rays really work though. How do X-rays painlessly reveal the inner workings of our bodies?

As Wilhelm Roentgen later learned, X-rays pass through tissue, casting shadows of solid structures such as bone. This is why denser body parts, such as bone and organs actually block some of the X-ray energy, making them show up like a photographic negative with white or gray spaces. Hollow spaces filled with air such as the lungs show up as black. This provides your doctor with a clear view of your structural makeup, to give you the best possible care.

The radiologist–a doctor who specializes in high energy radiation–can read these scans to diagnose conditions in your spine and bones, heart, lungs, tissue scarring and more. Once located, other medical tools such as MRI’s, CT scans and sonographic tools can help pinpoint and treat medical issues.

Even as you read these words, medical imaging and X-ray technology continues to advance. Next generation X-rays are becoming even more fine-tuned, allowing them to identify tumors in living tissue much earlier. Known as phase-contrast X-ray imaging, the new X-rays can measure the physical effect of the X-Ray passing through tissues at the speed of light. This adds a whole new dimension to the traditional science of X-ray.

So the next time you get an X-ray to make sure your arm is not broken, maybe spare a moment of thought to acknowledge the scientific debt we owe to a professor who, a little over one hundred years ago, noticed some crystals glowing in his lab! They’ve come a long way since then, even being digital and instantly available.

If you need an X-ray or other diagnostic imaging tests, get the exceptional care you need from one of our board-certified radiologists in the in Lake Worth, Wellington, Belle Glade, or Royal Palm Beach areas. Please call Independent Imaging at (561) 795-5558, or request an appointment online today. We are here to help.