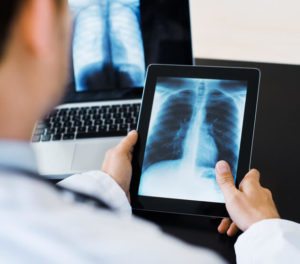 Radiography with X-ray is the starting point for diagnosing or screening of a variety of health issues, including pneumonia. X-ray technology is increasingly easily available to the medical community due to its low cost. It’s noninvasive, relatively harmless, and quickly produces the images we need to be able to diagnose issues effectively.

Traditional X-rays have been around since the early 1900s, using film to capture images of the body’s internal structures. With the addition of computer technology, digital radiography has become a much more efficient, cost effective, and an even safer method of producing diagnostic images.

If you have ever had an X-ray taken before, you have probably been asked to wear a big lead apron or blanket to shield the surrounding area of your body from receiving X-ray radiation. While traditional X-rays are considered safe, digital X-rays produce 80% less radiation than traditional.  This means it is highly unlikely you would develop issues from occasional traditional radiation exposure, but it is even less likely with the process used in digital X-rays.

The cost effectiveness of using digital radiography rather than film comes down to the fact that film is expensive. If you have ever owned a film camera, you will know that back in the height of Kodak film it was costly to purchase, and then costly to develop as well.

If you don’t own a digital camera by now, it’s most likely due to the fact that your phone provides one for you. But just like digital cameras, with digital X-ray, you no longer have to keep count of how many pictures you’ve taken. Storage space is virtually unlimited since you can transfer images onto a hard drive afterwards. The same is true of radiography. With film, it is difficult to store and then retrieve images as they degrade over time, but digital images can be saved and easily accessed without image degradation later on.

When you’re relying on your doctor to make an accurate diagnosis, image quality is everything.  Not only do you get results within seconds, but the image can also be easily resized to enlarge hard-to-see potential issues without distorting or degrading the quality of the image.

Do you have an X-ray scheduled? Learn more about how to prepare for your X-ray procedure before your appointment. For more information about the advantages of going digital, request an appointment, or call (561) 795-5558 today for imaging at one of our convenient Palm Beach County-area locations.