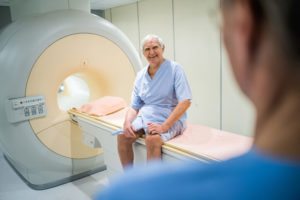 Alzheimer’s disease is probably one of the most tragic conditions, robbing millions of Americans not only of their lives, but also of their unique personality and most precious memories. Alzheimer’s disease is also an extremely difficult and emotional experience for the families and loved ones of the afflicted person.

In 2015, the incidence of Alzheimer’s continued to skyrocket, with one more person being diagnosed every 66 seconds. Alarmingly, it is the 6th deadliest disease in the United States. Compounding the tragedy even further is the disease’s mystery. While research continues for prevention and cures, Alzheimer’s disease continues to claim more and more lives.

However, could treatment to alleviate Alzheimer’s symptoms come from a surprising source? A case study published in April, 2016 by the National Center for Biotechnology Information discussed findings that CT scans, with their low dose of radiation, helped an 81 year old woman in end-stage Alzheimer’s make an astonishing recovery.

This result was found somewhat by accident. The patient had been transferred to hospice after she reached a nearly catatonic state, becoming non-communicative and immobile. Her husband requested a CT scan to monitor any physiological changes that may have happened. After a series of five CT’s, the patient was able to speak and move on her own again. Within a few months, she was able to be moved out of hospice.

Radiation has gotten some very bad press, particularly following famous disasters like nuclear plant meltdowns and atomic or hydrogen bombs. But the truth is, at the turn of the 20th century doctors were using low doses of radiation to treat a multitude of conditions – from cancer to gangrene, to ear infections.

High doses of radiation have long been recognized to be quite harmful, but low doses actually stimulate the immune system’s protective response to speed healing for a variety of conditions – without showing any long-term negative side effects for the majority of people.

The CT scans’ low doses of radiation triggered a healing response for this Alzheimer’s patient, and allowed her an amazing amount of recovery. The conclusion of the case study was that CT scans and other methods of administering low doses of radiation need to be investigated further for therapeutic treatment of Alzheimer’s, and other neurodegenerative diseases. It could be a promising treatment for this devastating disease.

At Independent Imaging, we offer diagnostic CT scans and many other radiological procedures on site. Call us today at (561) 795-5558 for an appointment with one of our radiologists, such as board-certified physician Dr. Christopher Lawton, practicing since 1980. You can also request an appointment online.