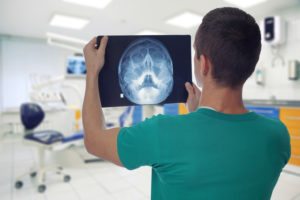 Medical radiology all started when a man by the name of Wilhelm Röntgen discovered what is called the X-ray in 1895. At the time, Röntgen was exploring how electrical rays can pass from an induction coil through a glass tube. In a completely dark room, the tube was covered in black paper, and he noticed that a screen that was covered in florescent material became illuminated by the rays created from the glass tube.

It started with this discovery, where Röntgen would later realize that other objects could be passed through these rays. He used an image of his own hand on a photographic plate, instead of a screen, where the image showed through translucently, creating an internal image of the structure of his hand. This discovery proved that the internal parts of our body can be seen without needing invasive and risky surgery to do so. The invention of the X-ray helped revolutionize modern medicine, evolving into what we use today, called the digital X-ray.

It was eventually recognized that frequent exposure to X-rays could be harmful, but today special measures are taken to protect the patient and doctor, and prevent complications. Today, digital radiography has several advantages over traditional film/screen X-rays, which include:

1. Less Radiation: Today’s digital X-rays have 80 percent less radiation than traditional X-ray machines. When you go to have an X-ray, it is inevitable that you may be exposed to some form of radiation. However, precautions and safety measure are taken, and the amount of exposure is both miniscule and brief.

2. Quality: For visibility and readability, due to these types of X-rays being digital and having advanced processor technology, the images are easier to resize into larger or smaller pictures, depending on the need. Most importantly, this is done without distorting the image, and losing important details that the original images hold.

3. Portability: Digital X-rays are extremely portable and save space, as they are digital, and they don’t require film or folder storage. Images captured with a DR unit can be transferred to a CD or a flash drive, and can even be sent in an email.

4. Quicker Results: With the advent of digital photography and cellphone cameras, people expect images right away. Digital X-rays are processed and developed very quickly, saving time for both doctors and the patient, allowing for quick and accurate diagnosis.

To learn more about digital X-rays and other forms of diagnostic imaging, call Independent Imaging in Wellington, FL at (561) 795-5558 to request an appointment, or request one online.