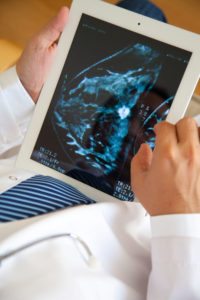 Breast cancer is a leading cause of premature deaths among women in the United States, with more than 200,000 new cases being diagnosed each year. However, statistics have shown the death rate of this disease has been reduced at least in part due to early detection. Innovative new imaging techniques such as digital mammograms have helped turn the tide for successful treatment outcomes.

A mammography is the screening test for breast cancer. For many years, before the evolution of what technology is today, mammograms were recorded on large sheets of black and white film. Today, like many other forms of diagnostic imaging, mammograms have become digital. Digital mammograms are recorded onto a computer, which helps to reduce what are called false positives.

False positives resulting from testing can be dangerous, especially if a quick diagnosis is made that leads to cancer treatment. However, mammograms are still the best way for doctors to find cancer early, when it’s most treatable. With that said, mammograms aren’t perfect, and a second test should be done to rule out the possibility of a false positive. Normal breast tissue can hide a breast cancer so that it doesn’t show up on the mammogram, which is called a false negative. Mammograms can identify an abnormality that looks like a cancer, but turns out to be normal.

It is important to note that digital mammograms reduce these false positives, and are beneficial as they produce less radiation, and have superior image quality, for better detection and diagnosis. In the case of ruling out false positives, it can be said that it’s better to be able to see everything, rather than miss something.

The American Cancer Society (ACS) recently updated its recommendations for breast cancer screening for women at average risk of breast cancer. Among its latest recommendations, the ACS suggests that all women should begin having annual mammograms as early as age 40-45, and then can adjust to having them every other year beginning at age 55, if need be. The ACS guidelines state that if a woman is in good health, regular mammograms should be continued.

Therefore, the risk of a false positive isn’t a good reason to skip getting an annual mammogram. If you’re 40 or older and have an average risk of breast cancer, yearly screening mammograms should be part of your healthcare. If your breast cancer risk is higher than average, you should talk to your doctor about a more aggressive breast cancer screening plan that makes the most sense for your particular situation.

There’s only one of you, and you deserve the best care possible. Don’t let any obstacles get in the way of your regular mammogram screening.

To learn more about digital mammograms, call Independent Imaging in Wellington, FL at (561) 795-5558 to request an appointment, or request one online.